This is just outside of Nelson, British Columbia- my most recent perching place. The view is from the top of some of the local mountain bike trails. Oh how I can’t wait to get out on ’em!

I am still registered for school this Fall,  even though I am not going. But Mama always told me to have a backup plan, so this is it. A part of that also means that I am working to get my student line of credit in order.

With that though, came some comic relief for a girl like myself. Let me tell you about it….

I inquired about online courses, to those people that hand me a debt, so I can go be like everybody else (okay, that’s conceded but what does school make us? Really?)…

Anyway, as I was trying to talk to this “student financial advisor” about my possibilities, she neglected me a way to pay for online courses right off the bat. Pretty much, I needed to have done that three months ago if I were to have had a chance at getting funded for Athabasca University. (This is only a fact from a long list of struggles I’ve had with OSAP).

Instead, the lady tried to convince me that, “I was approved of $13,000 if I went back to the UofL, and that that would be a good avenue to take,” … There were a lot of nitty gritty details in these two paragraphs; fill them in with something that you’re familiar with and it’ll all make sense (OSAP is the Ontario Student Assistance Plan).

$13,000 eh!? Well that’s a lot of moula for a girl with my kind of lifestyle! I mean, I’m surviving on my last $100 as we speak… But $13K! I could travel across the world and live there a few years with that kind of money. Or I could keep on haulin’ the van around North America: climb some mountains, run through the backcountry, go on walks through the forest for weeks at a time?

Oh the things I could do with all of that money! And I could do it for YEARS.  (Okay, I won’t exaggerate, I’d probably last two years out there. Still though, the difference is incredible).

But $13,000 (plus all the interest that the loan would accumulate, *eye roll*), it will barely cover my expenses for 8 months at university. It most definitely doesn’t cover the basics- rent, tuition, and food for the school year- I know that from experience.

Sure, that loan will give me another year of school for the track record; but I won’t walk out with anything after that $13,000… It’ll still take me another $30-40K before I get anything for it.

Formal education most definitely has it’s value- listening to non-science people talk science, hurts my soul- and I’ve only made it through the introductory level courses thus far. But putting things into perspective, is that sort of price worth it? I can learn all the same stuff for free online, going to professional talks, and other learning options. What about everything else there is to offer in the world?

My parents brought me up to appreciate family, love, and all that mushy gushy stuff; I’d start with visiting them more than once a year. Then I’d throw a dart at a map and buy a plane ticket for wherever that dart landed- and perhaps a travel pass around that continent too. I’d go there, learn about indigenous ways (because I think that is something important to learn about). I’d register for free online courses, because I wouldn’t want to fall short of the academic bandwagon either. And I’d rock climb, because that shiz is cool man… Maybe I’d finally get around to learning to skydive too. Why not right? I’ve got $50,000 ,and living minimally (as in homeless), that’s a solid 5 years out in the world. I could sacrifice one for some excess adventures. 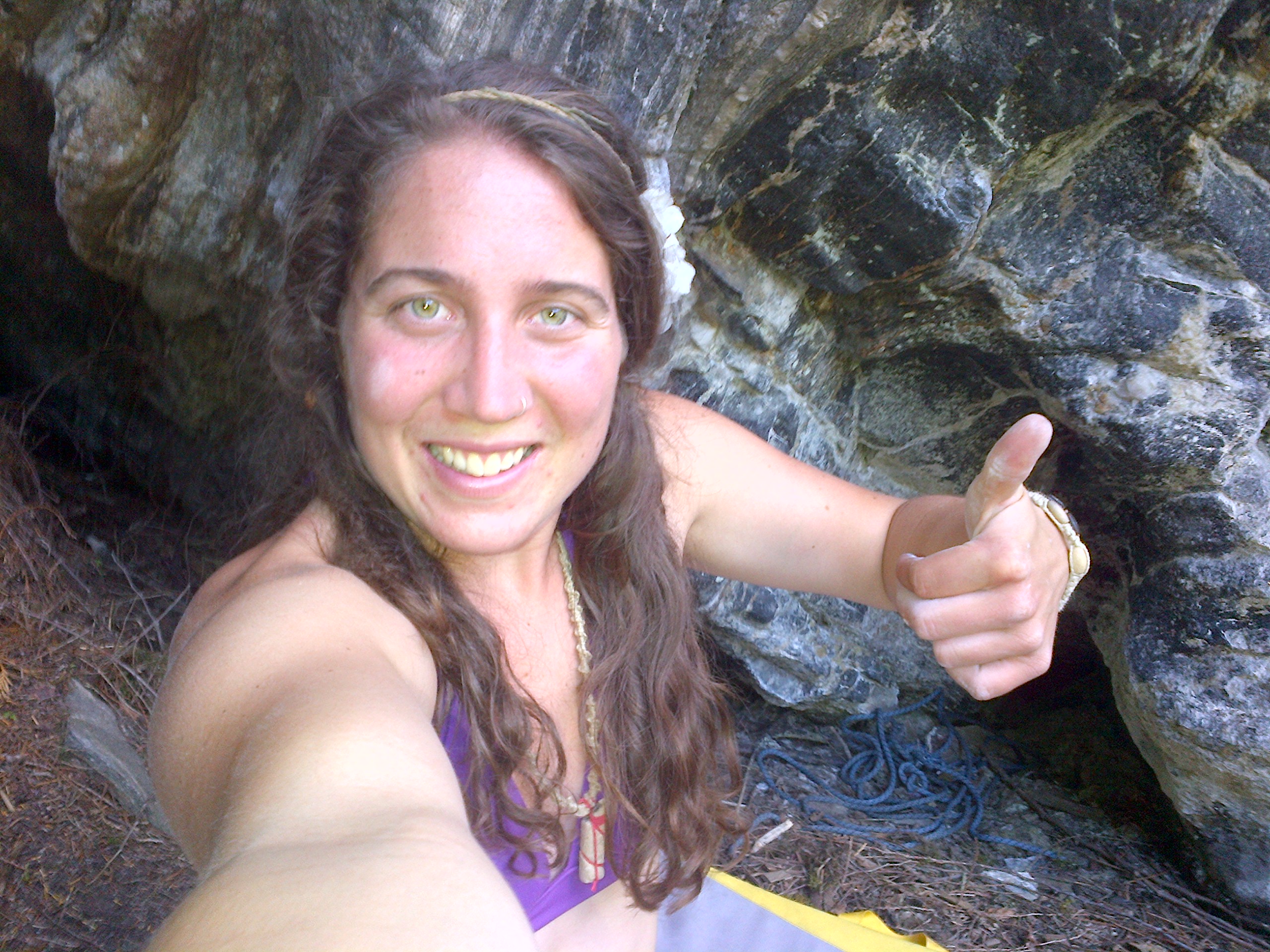 This is me saying “YES” to bouldering. It’s been a slow conversion folks, but I’m almost there.

Just out for a grocery, to buy a jar of pickles and a treat to munch on and this is what I find. Mmmm, I love kayaking too. Why world? Why must you continue to add to my list of sports to indulge in.

I’ve kicked my shoes off and made camp by the pop machine in front of Safeway. Here, I can charge my laptop and my cell phone after another gorgeous day in Nelson, BC… All while I mosey around the internet and watch the sun set over the ridgeline ahead.

How many “homeless” remarks have I had? Looks of judgement? Or curiosty? A solid handful for sure. And I am dressed quite decently- in a small 8,000 person hippie town, where people walk barefoot and grocery stores have shoes ready to lend while you shop.

Yet they still look my way, towards my ordinary self.

They look at my crappy computer and my broken cell phone, with my nice shoes and expensive backpack. They look at me munching on a jar of pickles and a bag of chocolate almonds at supper time. They look with curious eyes.

But what are they looking at?

What do they see when I park my van next to the lake, open the side door on a sunny day, and relax to read a book or two?

What do they see when my puppy jumps out of the trunk, followed by a girl happily tossing a stick from the “couch”?

I’m not special. I know that.

People are watchers– we’re curious beings looking for answers
I just happen to spend a lot of time in non-normal circumstances. And so I notice people watching me, watching them; taking part in our very different lives.

They wonder what I am doing, I wonder what they are thinking. We wonder because we have minds that let us wander.

Other than that though, nobody really knows why they are doing anything, do they? I mean, you can provide an answer but there can always be another why- children know this. So we become storytellers, hoping to explain our direction; a destination of where our curiosity is taking us.

Really though, does it matter?
Do you really need to know why I like to rock climb, live in my van, and eat pickles on the scrummy ground of Safeway?

And you to? Do you really need a reason to do whatever it is that calls to you?

Just do it. Kayak, jump out of an airplane. Or maybe painting is more more your thing? Perhaps you just like to talk to people- go out and do that.  Do whatever you feel like, for no other reason than that reason alone. I am sure that, if you are truly passionate about it- in that moment- it is going to be beneficial to you, and the world.

I’ve been in a car for the past day- I left a place that changed me forever- and I went back to a place that stayed the same… It’s all but a standard day from the traveller’s perspective.

We wander between places looking to learn and grow; we aspire to discover new things about ourselves and the world we live in. And we do so on a constant basis.

Familiar places are never really a thing, because we never are the same person we were when we left. And unfamiliar places seem to have a ring, like a good friend calling you out for a dinner date.

The traveller lives in some paradoxical world…
We never really fit; we spend our lives being strangers everywhere that we go.

But then we get a calling,
and once again we must go.

Despite our well practiced improv skills, we never really know where it is that we are going- never mind why. We simply make up a story that satisfies the needs of the inquisitive mind; because we know that an inquisitive mind will never truly understand where we are headed anyway.

It’s a gut feeling; a deep attunement to the world; an acceptance of the unknown, that guides us on our way.

If you wish to understand, you’ll have to open your heart and let go of everything you ever thought you knew:

If you want to understand, you’ll have to believe in the possibility of magic.

Well, this week may be the start of a new chapter, or it may not. I’m not quite sure how it’ll work out from here because once again, things haven’t gone as planned.

But I’ll tell you how, in the past month I have paddled over 100km down the North Saskatchewan River and hiked over 140km through the Rocky Mountains. I have gotten to know about two dozen wonderful teenage girls, and have had the opportunity to help guide each one during a pivotal life stage.

I have seen sites that few people will ever see, and I have experienced the majestic visit of a wild wolf over breakfast. I have finally started picking up my guitar again, and I have spent significant time in meditation at high altitudes.

I gave up some of the things I love most and I set aside the things civilization was asking of me. Internet access became a luxury and a cell phone became a foreign object. Showers are saved for celebratory occasions, and laundry has become overrated.

I have laughed out of pure joy, and sent it on a contagious spree- leading to a severe case of life appreciation by everyone around. I encouraged others in discovering new perspectives, and quiet time to take it all in. And personally, I have learned to see the beauty of this world from a whole new perspective, raising myself to a new level in the spiritual realm.

Let’s just say, it’s been another journey for the books. Only this time, I got paid to do it. I got paid to live and learn; explore, share, and love with everything I have.

That’s what I call a job.

For now though, my dog has called me back to her and only life knows where we’ll end up next.

Fun fact: humans are animals and life is for living.